Find exactly what you need.

Its quick and easy.

Doing the same thing day in and day out it is easy for anyone to get complacent, letting our guard down. The truth is that the environment of an auto body shop can be quite volatile because of all the chemicals and vapors within the shop. As you will read below it isn’t the new guy on the block it most often is a seasoned person that has been doing this for a while and begin to get slack in regards to EPA and OSHA regulations. Those regulations are in place to keep everyone safe and in business.

Without proper management of the mix room, properly marked collection containers, recycling waste onsite to limit quantities, and keeping the floor and work areas free of dust and debris can save a shop, save a life, and save money.

A shop experienced $45K in Damage caused by Aurora Body Shop Fire. The owner of the shop was welding in the shop prior to the fire starting in a highly combustible area. Here are just a few examples below.

Crews from Jackson County Fire District 5, Ashland Fire & Rescue, and Medford Fire-Rescue knocked down a blaze that started in the paint bay of the body shop, located in the 1300 block of Highway 99, some four yards outside Ashland city limits, according to Ashland division chief Chris Chambers. Fire District 5 chief Charles Hanley said estimated damage to the shop’s structure and contents will total $100,000.

Three agencies arrived with one water tender, one heavy rescue vehicle and four chief officers, and an ambulance. Ashland police directed traffic along Highway 99. The fire reduced traffic to one lane between about 1:30 and 2:30 p.m.

When the first crew arrived on the scene at 1:29 p.m., flames escaping from an exhaust vent through the roof nearly spread to an overgrown brush on a neighbor’s property. Despite the flames and large plumes of smoke seen from the roof, the fire never spread to the roof or attic.

A technician was about to respray a Toyota Prius in the shop when a rag caught fire, according to Anderson employee Brian LeBlanc, who works as an estimator and marketing manager. An employee thought the fire was out, but staff quickly evacuated after flames spread and smoke filled the building. No injuries were reported.
“You get to a certain age — it was time to get out,” LeBlanc said.

A Cave Junction fire illustrates how quickly the body shop fire was out of hand. That wildfire closed Redwood Highway for about four hours while crews — including some from Medford — battled a 10-acre blaze that ultimately destroyed 200 vehicles at a nearby auto dismantling yard. 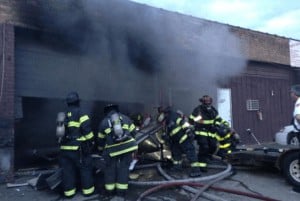 An explosive fire at an auto body shop in Montebello left hundreds without power and some evacuated Wednesday morning.

Firefighters and police responded to Seidner’s Collision Center in the 300 block of W. Whittier Boulevard at about 12:30 a.m. after receiving calls from residents hearing loud explosions.

When authorities arrived, they found heavy fire showing from the back of the building and a power line exploding.

Fire officials said this was extremely dangerous due to chemicals inside the building. The back portion of the building partially collapsed before firefighters declared a knockdown. 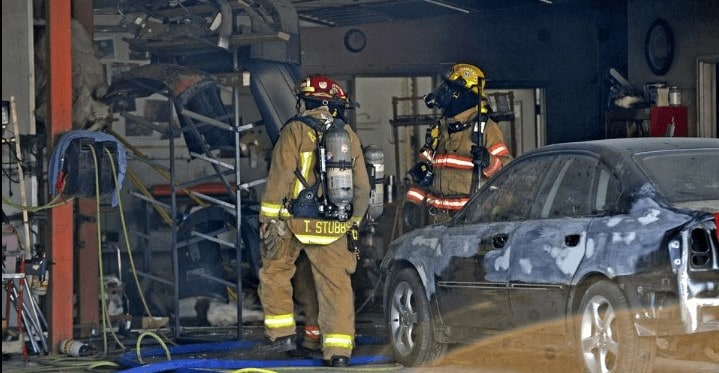 Don’t let this be your business!

Understanding the EPA and NFPA guidelines and regulations in relation to proper storage and disposal within the shop.